Home of the 'Appy Ammers'

The Following Riders lost there Lives

Whilst entertaining us at Custom House! A young American discovery who in his third season with Wimbledon was sadly to loose his life at Custom House in July 1952, When needing to stop a Hammers pair getting a 5-1 to win the meeting, Ernie did not make the gate and tried all he new to split the hammers pair! He was unable to see through his eye shield, which he tragically discarded and was struck in the eye by flying shale. He lost control of his machine, unable to see he careered into the fence hitting it at speed. He sadly never recovered! Ernie was a great loss to the sport having made the world final the previous year his death cast a shadow over the world of speedway! 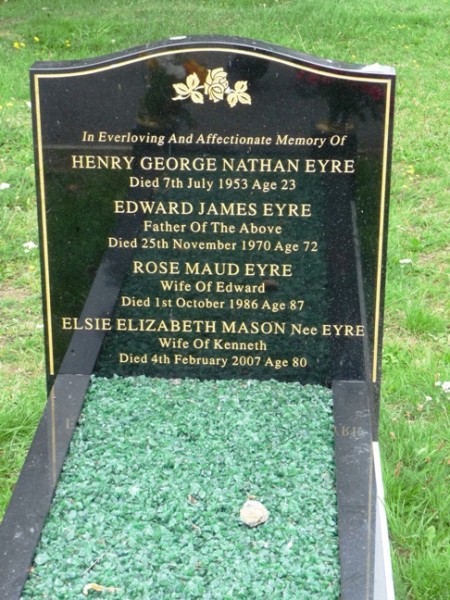 Harrys resting place in the comfort of his family

Young Harry, who was 23 at the time, sadly died as a result of a crash on the track on the 6th of July 1953. He was a West Ham Junior making his way in the sport. Harry fell in a novice race and was picking up his bike when another Junior rider unable to avoid poor Harry, ran into him at full speed.

A funeral service was held for Harry at St, Mary's Church, in St, Mary's Road, Plaistow where Harry had been a choir boy in his youth. Following the service he was buried at West ham cemetry in grave A390. Harry had recently been demobbed from the Army where he served as a despatch rider for five years.  He had resumed his friendship with Pat Clarke and was trying to make a living as a rider himself.  That friendship went back to the Cycle Speedway team that operated out of the Black Lion public house run by Pats father.  A lot of the Cycle speedway riders made the jump into Speedway proper including Pat and Colin Clarke, Lenny Silver, Ronnie Genz and Reg Fearmen and I'm sure many others. 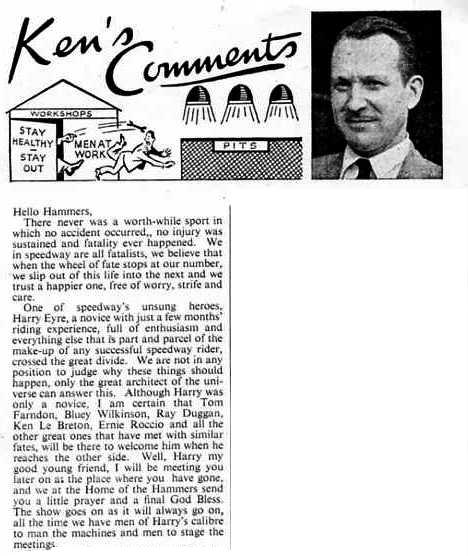 Information supplied by Victor Dowell (Many thanks) 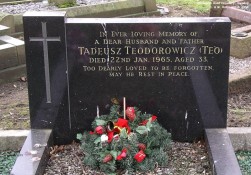 Teo a Polish rider who married an English girl and became a naturalised British subject, was on the brink of the big time. He was 33 when he crashed at West Ham on September 1st 1964 whilst riding for Swindon and later died as a result of his injuries!

On Tuesday the 1st of september 1964, West Ham played host to the swindon Robins in the 1st leg of the National Trophy Semi-final. In Heat 12 Brian Brett and Teo were lined up against the home pair of Bengt Jansson and Norman Hunter. Teo was riding out wide on the fourth bend, but clipped the fence which threw him head fisrt into a supporting staunchen. In Tommy Price's programme notes the following week Tommy stated.

"Sad spot that marred an otherwise successful evening was the crash and injury to the popular Polish lad, Tadeuz Teodorowicz. Teo clouted the fence very heavily in heat 12, yet initialy seemed only mildly concussed and shocked. Later reports however indicated that he was much more seriously injured than it first appeard. He was taken to London Hospital last tuesday evening with a suspected fractured skull. I know you will join me in wishing Teo a speedy return to health. We hate to see riders getting hurt here at West Ham; But unhappy incidents like these do serve to remined us of what a dangerous sport speedway racing can be. Get well soon, Teo"

In the programme notes from the 2nd leg at Swindon on September the 5th it stated.

" It has been a week of  Triumph and Tragedy, The success of Barry (Briggs) andMike (Broadbanks) at Wembley on saturday was overshadowed by the injury at West Ham of Teo.

Teo had lined up at Wimbledon in a National league match on Monday after taking a tumble at Wembley two days earlier. At West Ham he overslid on the final bend and crashed into the saftey fence. He was carried off badly dazed and it was felt he was suffering from concussion. but at Poplar hospital later he became unconscious and was transferred to the London Hospital where, at the time of writing it was feared he had a skull fracture"

Sadly Teo lost his fight for life in January 1965.

In the programme for the first meeting of the new season at West Ham in 1965 the following statement was edged in black.

"We deeply regret the passing in his sleep of Tad Teodoowicz 142 days after his tragic accident here on 1st of September last, we shall not forget". 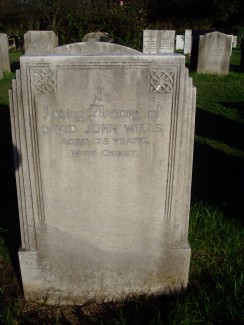 Further to the report of Teo's death in the 1st programme of 65, Also mentioned was a young Aussie Dave Wills.

"Aussie Dave Wills looks the right sort, keen. It takes guts to travel 12,000 miles to try your luck in the toughest biz in the world. dave has a new motor and bags of enthusiasm. Always been stylish Diggers here, Witness Wilkinson, Lawson, Young, Cresp etc. Hope you keep up the tradition son"

Dave Wills, a young boy who trekked all the way from Adelaide, Australia, to jion the 'Hammers'. Tonight, virtually untried, we throw him in at the deep end with every good wish in the world. If he goes well, all our troubles are over. But we must not expect to muchof him at the start. Give him time to develop, to settle.

Dave was a student of Jack Young. He rode at Rowley Park for 2 seasons, (he did not tell his parents he raced and even told them he went to england on a working holiday) before paying his own way over to England with a conrtact to try his luck. Dave had left home and was living at the time with his Aunt. His father was to see him off  at the docks. Dave came over with another young Aussie, Neville Slee. Neville raced second half's at West Ham. Dave cracked his shoulder in heat 1 of the 2nd match at West Ham on the 13th of April against Wolverhampton. Bob Andrews for the Wolves fell right in front of Dave, who managed to turn his bike to miss Bob, but crashed heavily into the fence. He took no further part inthe meeting. Dave struggled to make a name for him self after the crash and on the 22nd of June a special challenge match was arranged at West Ham. The challenge was in the 2nd half following the main event when West Ham beat Belle Vue. It was for juniors of both West Ham and Hackney and was said to be arranged especially for Dave who had recoverd from his injury and needed some team racing to build up his match fitness.

The 1st race of the challenge was Dave's last. Dave fell on the third bend and was struck from behind, by another rider who was unable to avoid him! A racing incident, for which no one was to blame.

"We did not realise how bad Dave was, but a call went out for 'No.33 to the pits', and an ambulance came onto the track. Dave died on the track, well that was the story that went round, I could not say.

The Final of the Midsummer joust was raced off, Won by Ken Mckinlay, who earlier had retained his Silver Sash. A few more races, which nobody, had any real heart for and the meeting was over. But i think we all new at the end of that meeting that we had witnessed something that all true speedway Fans never want to see, A rider giving his life for the sport we all loved." The final home meeting of the season, (West Ham won the KO cup the previous evening at Exeter) finished as it started against Wimbledon this time in the Final of the London Cup. The Hammers succeeded again which left the hammers supporters waiting for the coming Saturday, at Cradley Heath and the chance to make it all three and become the first ever British League Champions.

"And, mid all the fun and games that a final meeting always evoke, let us remember one man not with us tonight, but would have been thrilled to share our success. the  late dave Wills, would that he could still be a member of the  finest team West Ham  has ever known"

"We all went to Cradley that Saturday, we even, we even bought fans from Wembley and New Cross, who's supporters clubs were still running. The hammers took the crown, but we all new that as the teams victory parade went around the track, there was an 8th unseen rider with them."

Following Dave's death, a group of Aussie riders found money to return his body home, however, when told of their son's death his family who due to their religion were opposed to his racing, agreed that his body would remain in England so the  money was used by the UK branch of the Plymouth Brethren to bury Dave.

Dave was laid to rest at the city of London Cemetery on the 14th of July 1965 (Note the date, five years to the day, and the crossed hammers flag flew low again, this time for our lads at Lokeren.). It was a private service however Aussie riders Neville Slee and Harry Denton were allowed to attend.

Shortly after the burial, a memorial service was organised at St. Cuthberts Church, Hoddesdon. 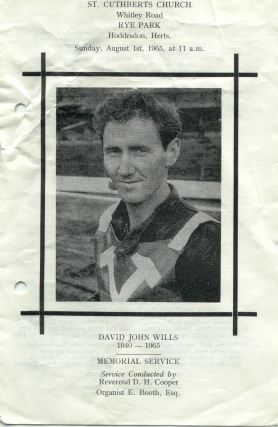 Riders racing leathers and a West Ham race jacket was placed on the Alter! 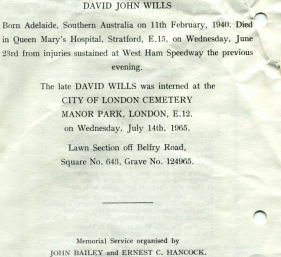 Dave rest's at the City of London Cemetery Manor Park 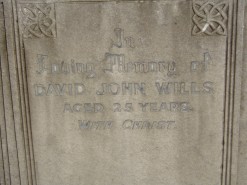 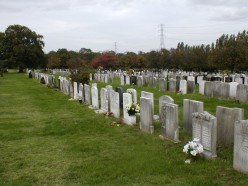 Greatful thank's for the help of Robert Rogers